Brand Names at the Dollar Store

Brand Names at the Dollar Store

Brand name products are showing up in dollar stores in ever-increasing numbers. Dove, L’Oreal and Quaker are just three of the brands you will have seen at Dollarama in recent months, all priced at $2 or less. You have to wonder how it’s possible.

According to Paul DeLaplante, a public relations consultant for Dollarama, the store’s success in being able to add name brand merchandise to their mix is simple. “The business model of Dollarama is that they source directly,” he said, “There are no distributors or middle men anywhere.”

But, as I discovered, cutting out the middleman is only part of the story.

Jeff Doucette, owner of Sales Are Not Simple, a Calgary company that offers sales training, strategy consulting and market intelligence, confirms what many of us already guessed. “One of the upsides, one of the best things that happened for dollar stores, was the recession,” he said.

In the past, CPG (consumer packaged goods) manufacturers didn’t want their products associated with those stores, but they soon realized that customers, in their quest for lower prices, were no longer buying their goods at stores like Shoppers Drug Mart. Manufacturers realized that their refusal to deal with dollar stores meant they were losing sales to competitors. “The big, organized chains are really quality retailers now that people go to en masse for certain categories almost exclusively. So it’s a fabulous retail channel,” said Mr.Doucette.

When Dollarama did its initial public offering on the stock market, that also signaled to the vendor community that dollar stores are here to stay and they’re only going to get bigger, he said.

“Now this is a legitimate channel and there are some good volume opportunities if you’re shipping to some 600-odd stores. So I think a lot of companies do have a specific strategy now,” Mr. Doucette said. 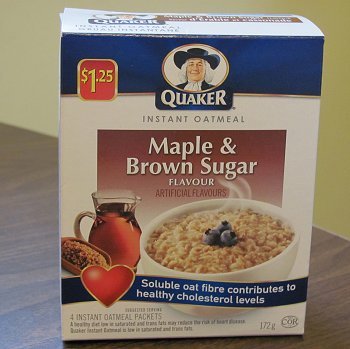 One of the products packaged
specifically for Dollarama

Unilever, Proctor and Gamble and other CPG companies started to design products specifically for dollar stores. The idea was to be able to sell their wares for $2 or less without it being an 80 per cent discount on the product. Usually, that means smaller packaging. When you see full sized products like Dove body wash in Dollarama, said Mr. Douchette, it’s usually because Unilever has changed the packaging or something has only six months shelf life left.

And brands that have fallen out of favor with major grocery and drug stores in the last decade seem to have found a new home at dollar stores, as well. Lavoris mouth wash, Old Dutch powdered cleanser and Suave shampoo, are all examples of products you no longer see in mainstream stores. But these and others like them are regularly stocked by Dollarama. That’s good news for cost-conscience shoppers everywhere.