Make a Craft Storage Unit from an Old Folding Screen 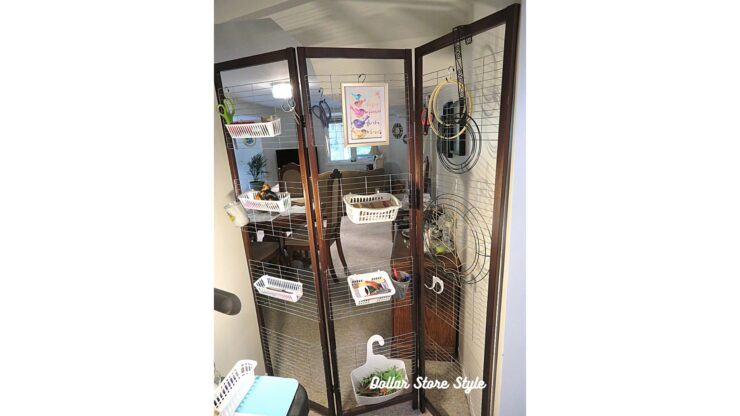 Make a Craft Storage Unit from an Old Folding Screen

I’ve had a three-section folding screen for a long time. When I washed the canvas panels from it a few years ago, they shrank, even though I washed them in cold water. The original panels were now significantly shorter than they needed to be in order to use them in the folding screen.  I figured one day I would make new panels for it but never seemed to find the time.

Now, in my new apartment, inspiration struck. I now have a smaller area to use for crafting and, well, read on to see how I used a few Dollar Tree cooling racks to make a freestanding craft storage unit from an old folding screen. 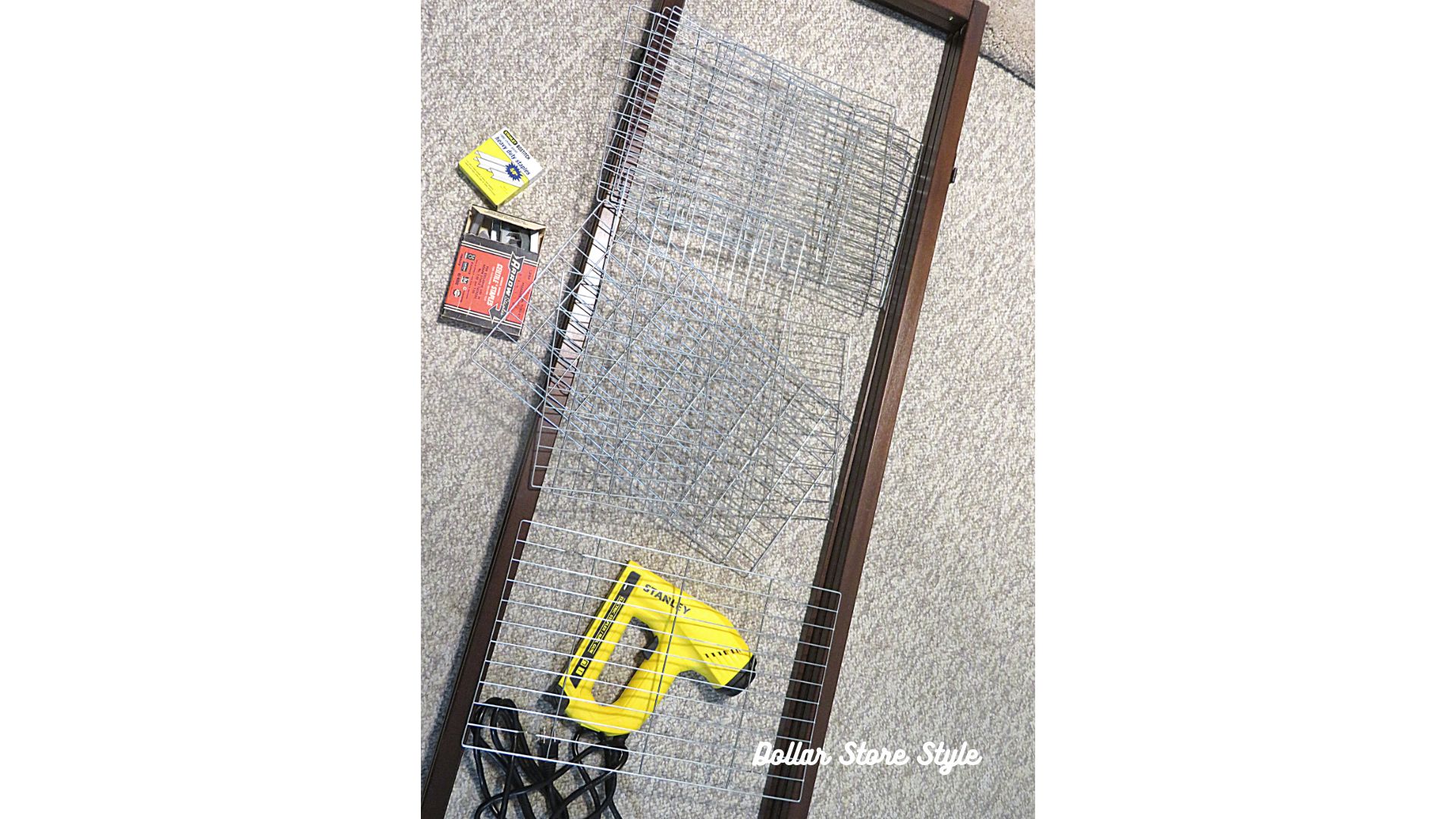 Since last Christmas, I’ve had an electric staple gun, gifted to me by my son with the admonition that I not hurt myself. (My kids know me too well.) Anyway, this was the first time I got to use it and I love how an easy push of a trigger gets the job done. 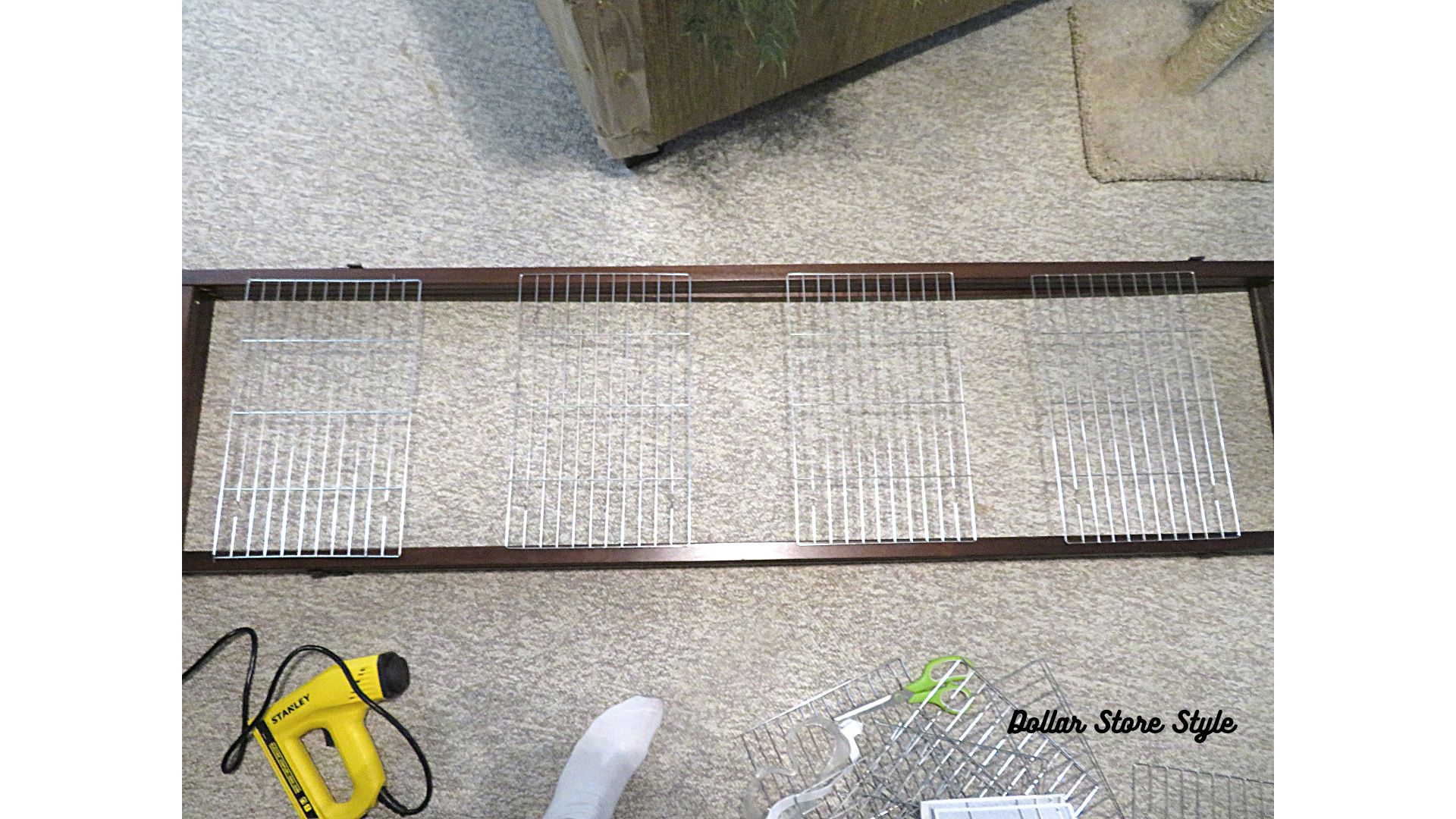 These cooling racks are 16 long by 10-inches wide, perfect for spanning the width of the folding screen. I used four racks for each section in the folding screen and began by spacing them out on the first section to see where I wanted them to go. As pictured, there is about a six inch space between each rack, but I didn’t bother to measure. 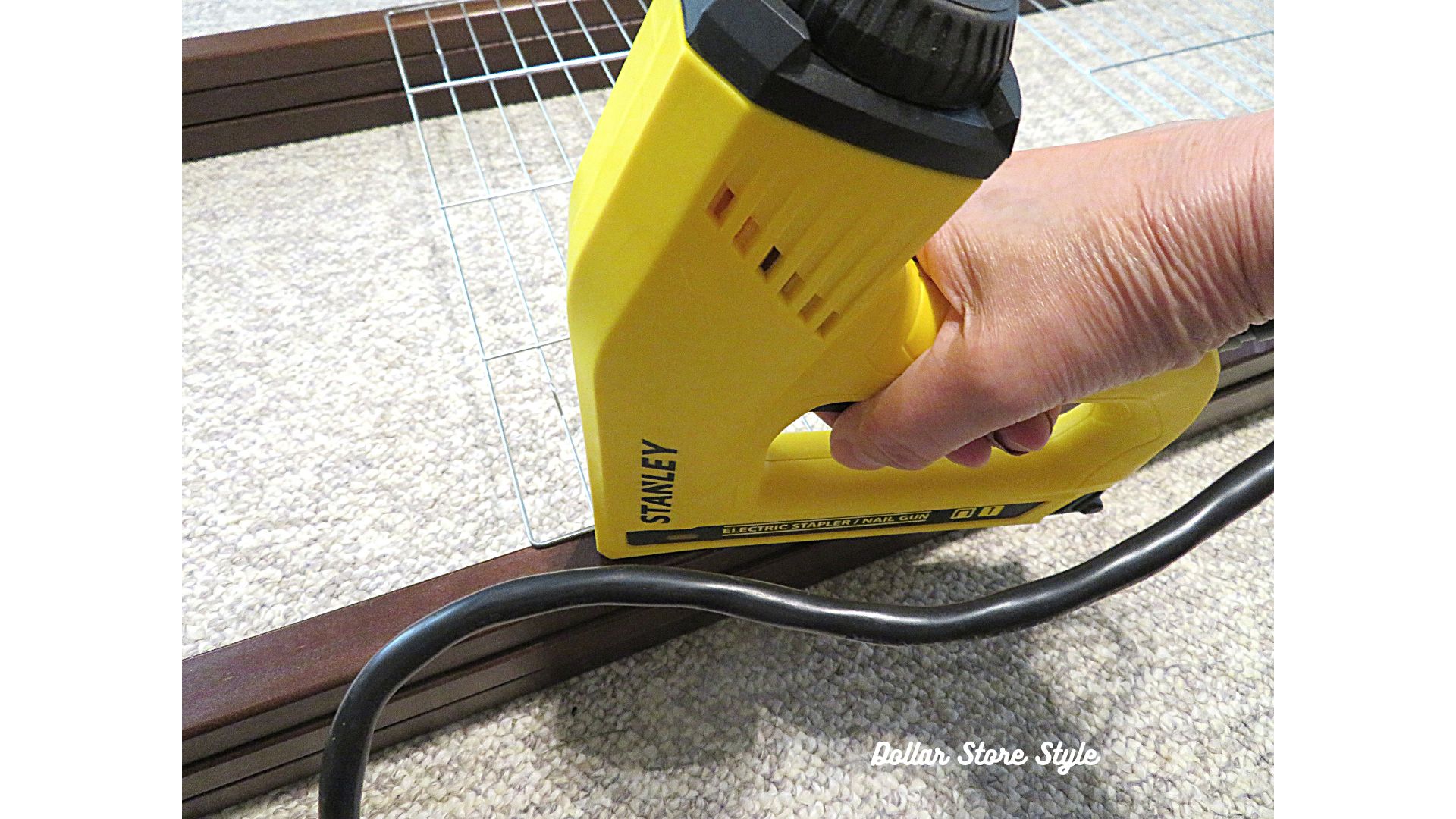 Next I held each rack in place by putting two staples in both sides. 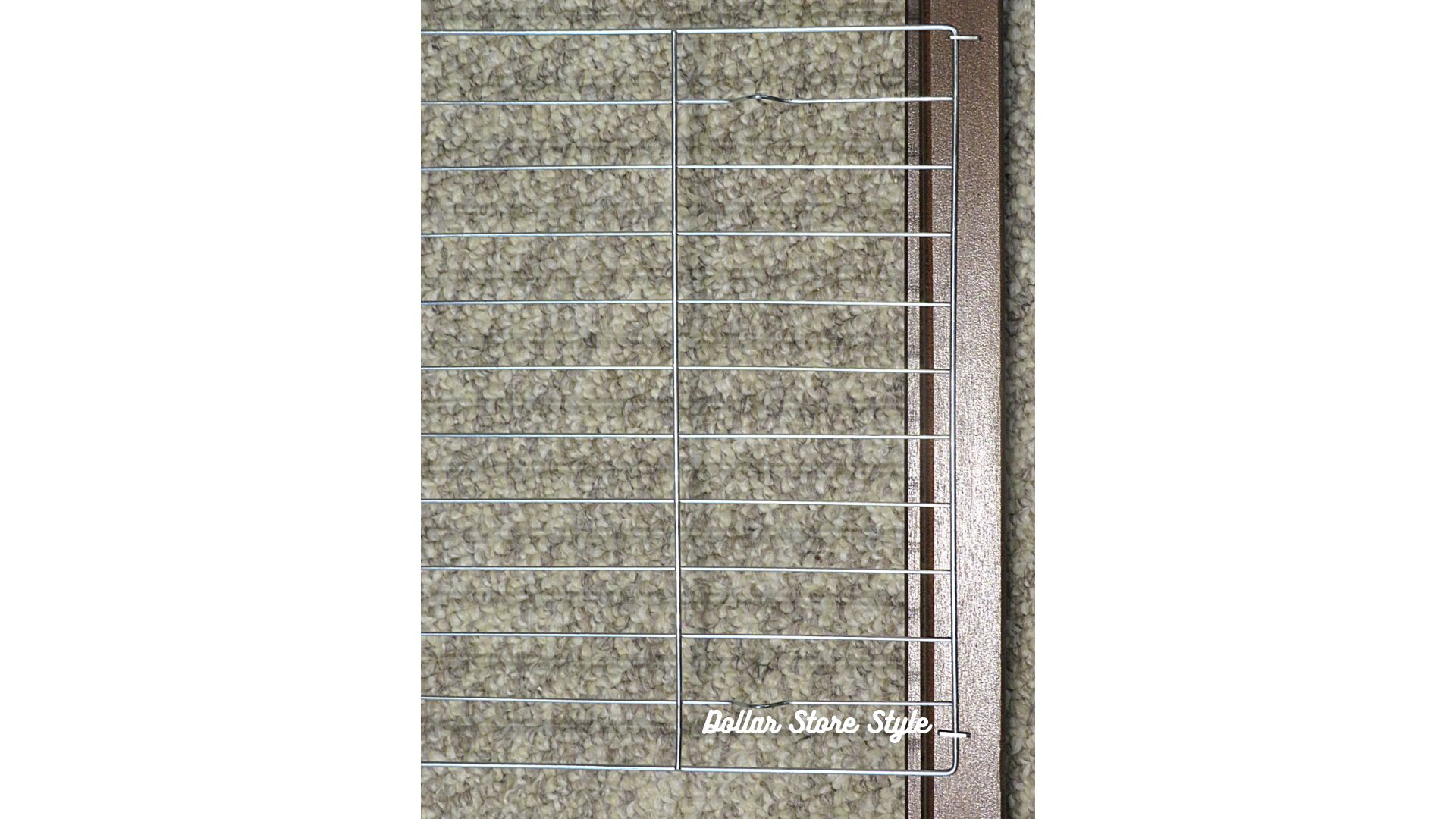 One staple at the top corner and one at the bottom corner on each side was sufficient to hold the racks in place on the wood frame. 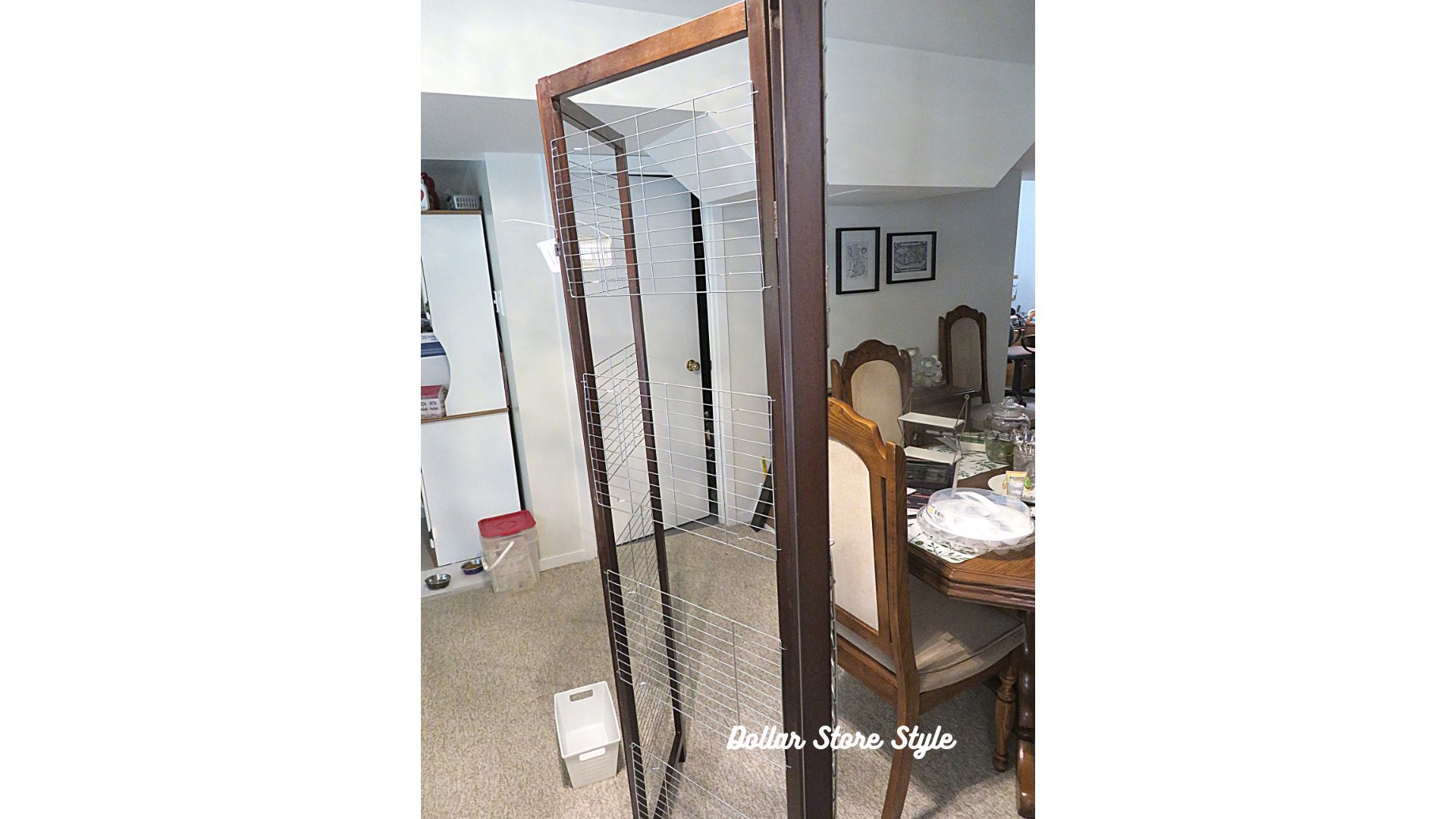 I continued until all three sections of the folding screen held four cooling racks each. By folding the second screen on top of the section that already had cooling racks on it, I was able to position the next set in the same places as the first set. Then I did the same with the third section.

In this way, I ensured that all three sets of cooling racks would be evenly spaced so the overall look would be uniform. 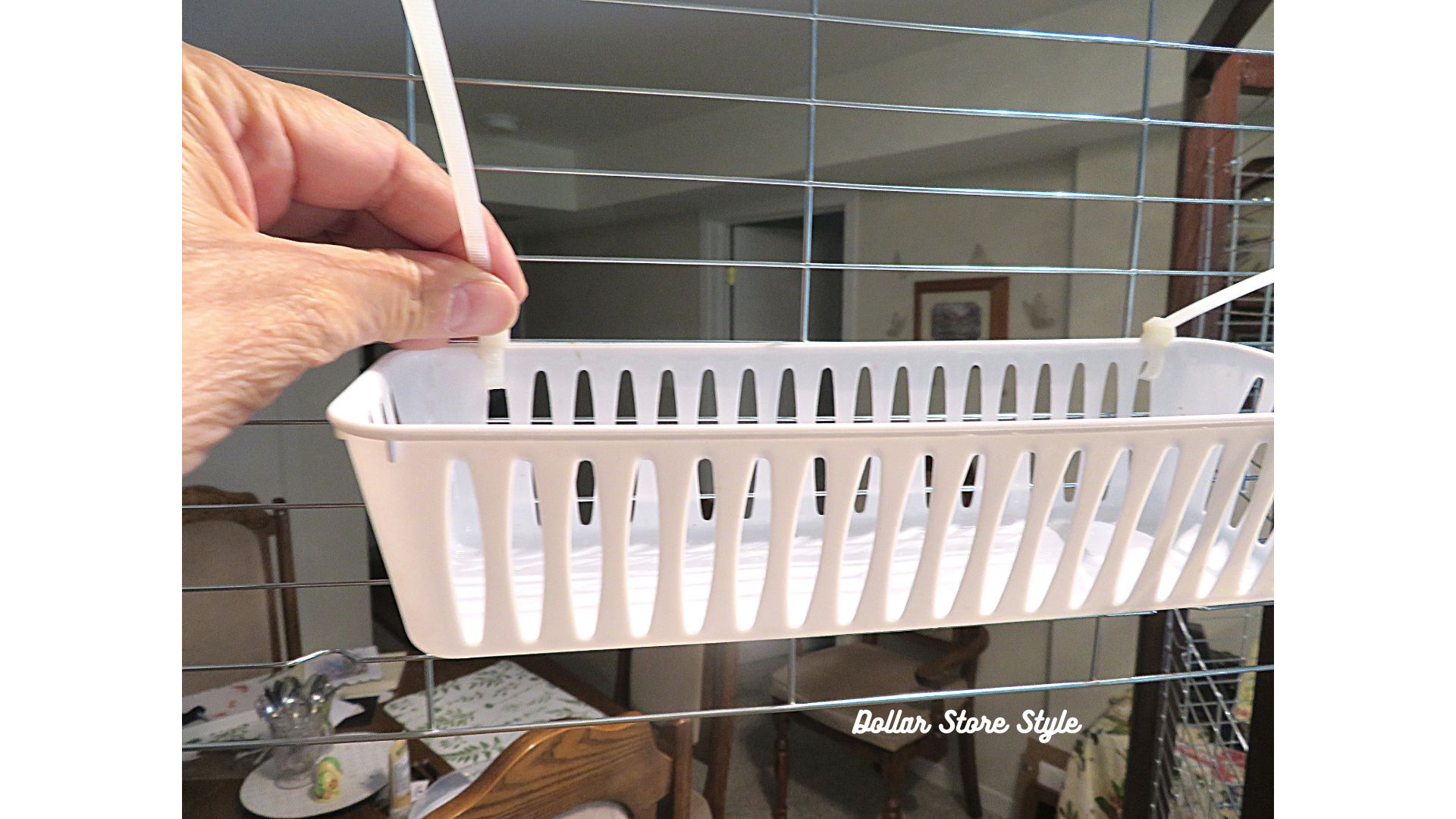 I used cable ties to secure plastic baskets onto the cooling racks, trimming the excess ties, of course.

In one basket I’m storing my favourite hot glue gun and finger protectors. Next to that, I used some thin twine to tie a pencil cup to the rack to hold glue sticks. 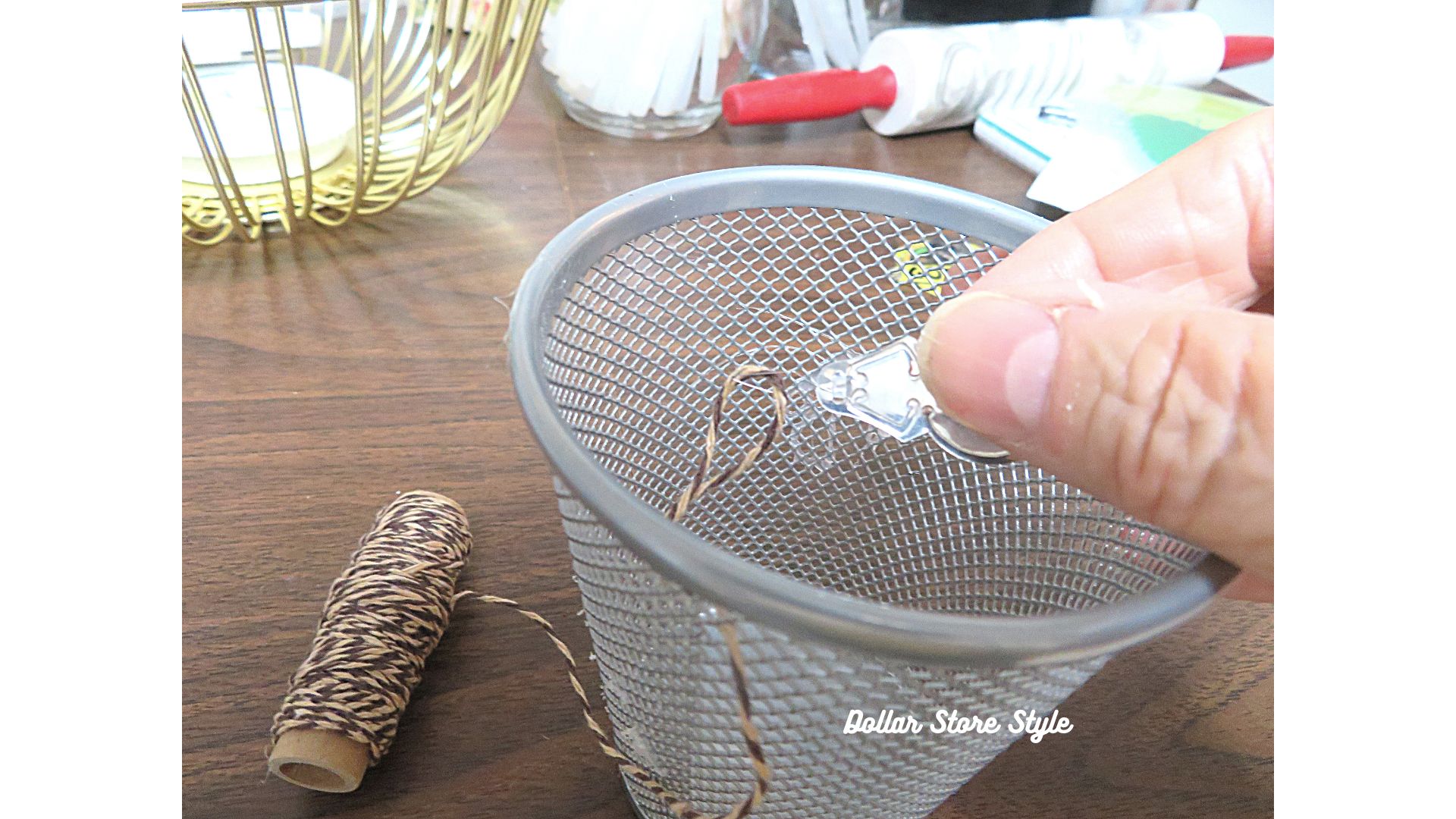 Tip: A needle threader is very helpful when threading the twine through the holes in the pencil cup. 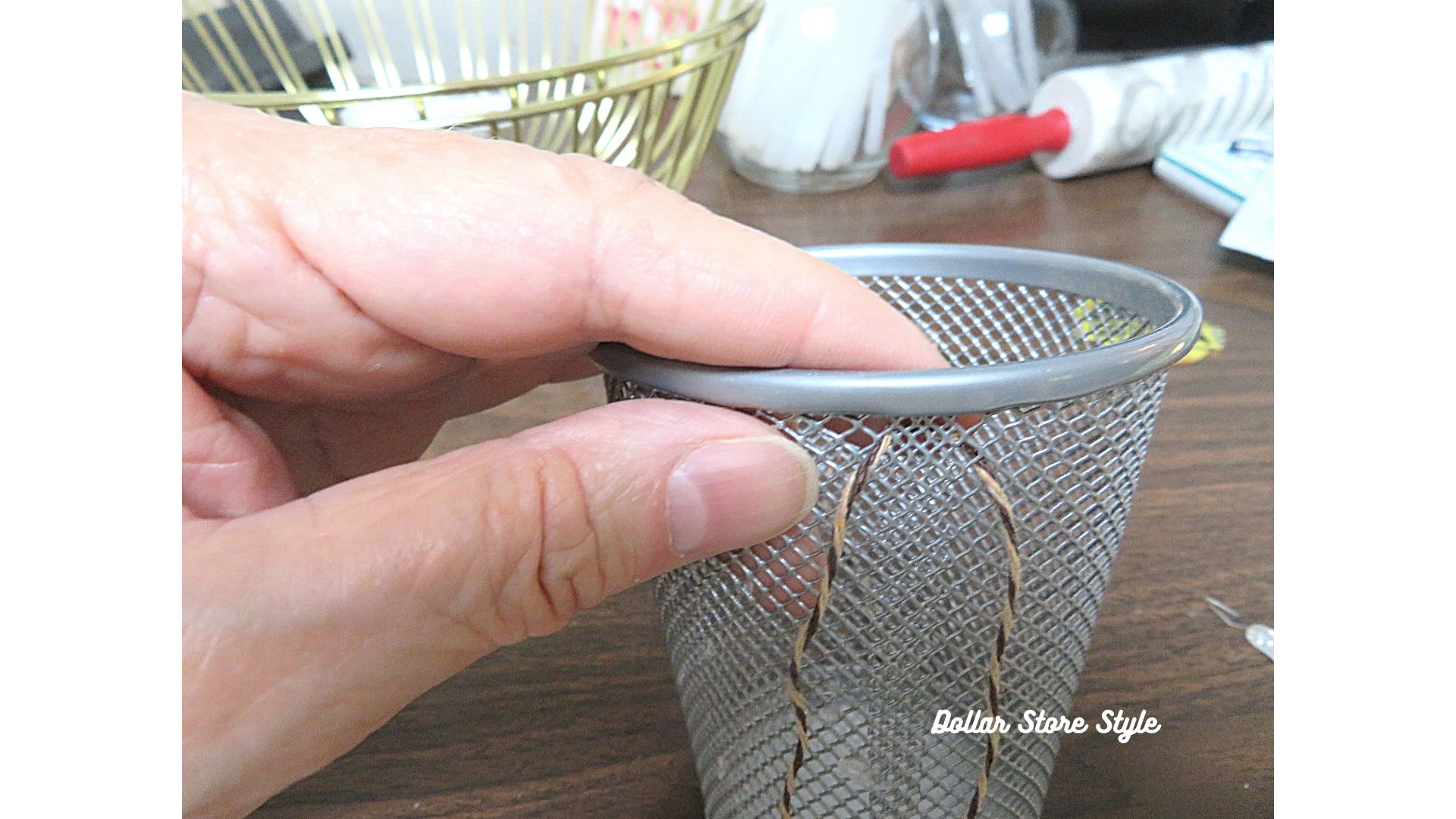 Thread the twine through twice around the seam in the pencil cup, then tie it onto one of the racks where you want it. I cut the glue stick label off of the package and glued it to the pencil cup to designate it for Gorilla Glue sticks only. 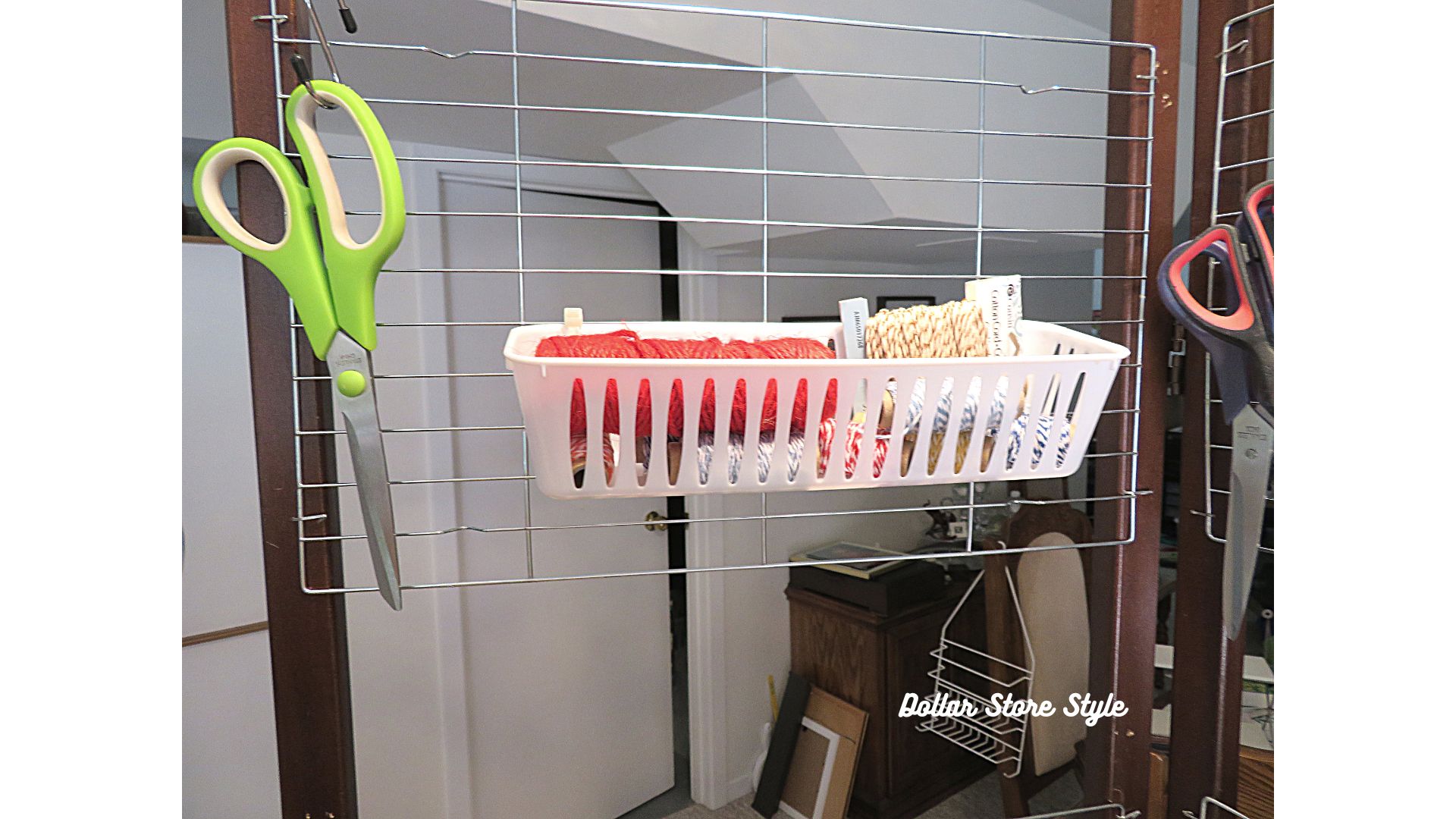 You can get the two-inch s-hooks pictured at Dollarama. S-hooks are perfect for hanging your scissors. Here, I’ve hung a pair of scissors next to the plastic bin containing my twine. 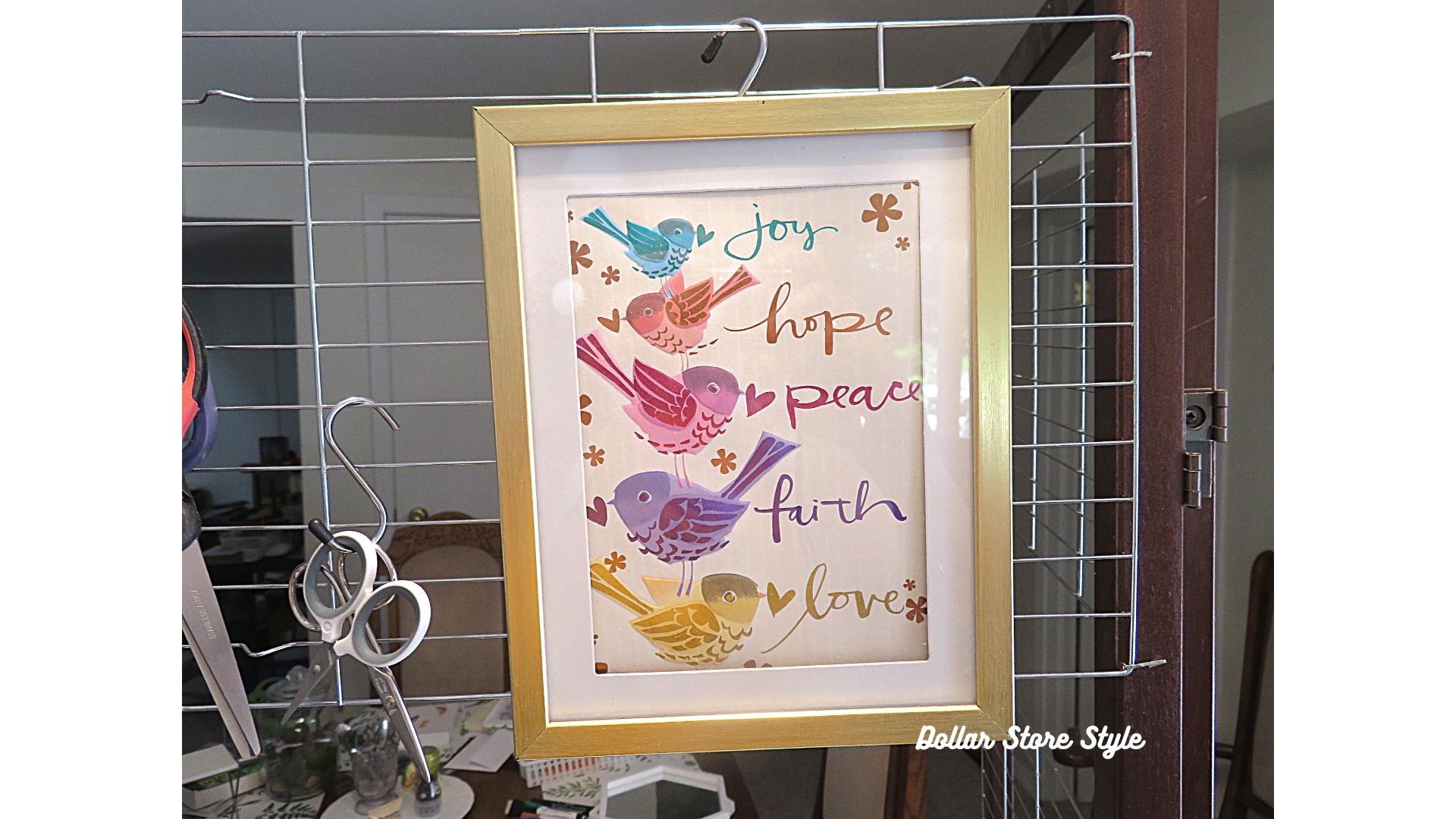 Besides craft supplies, you could also hang light artwork. 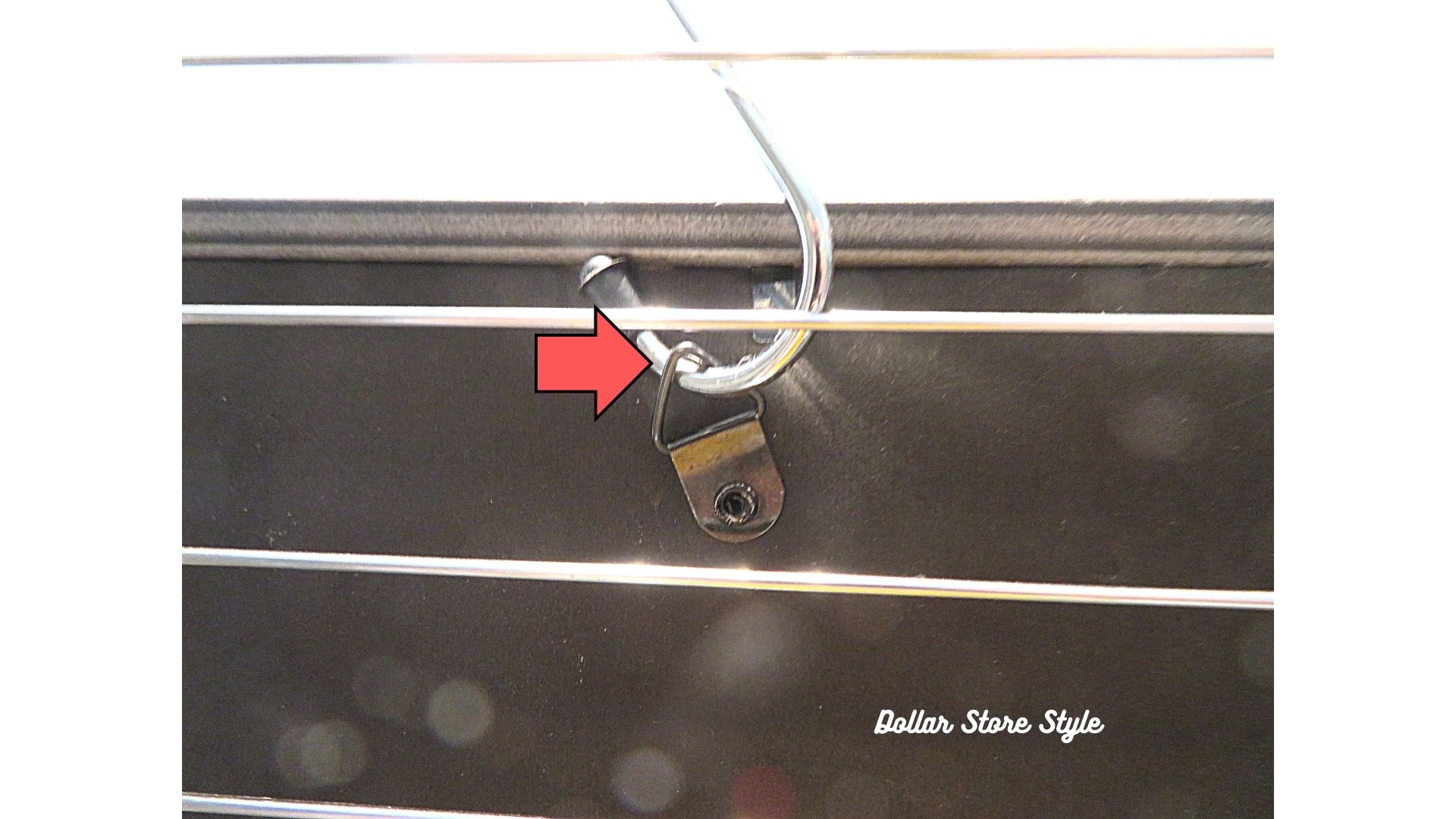 This kind of picture hanger works well with an s-hook. 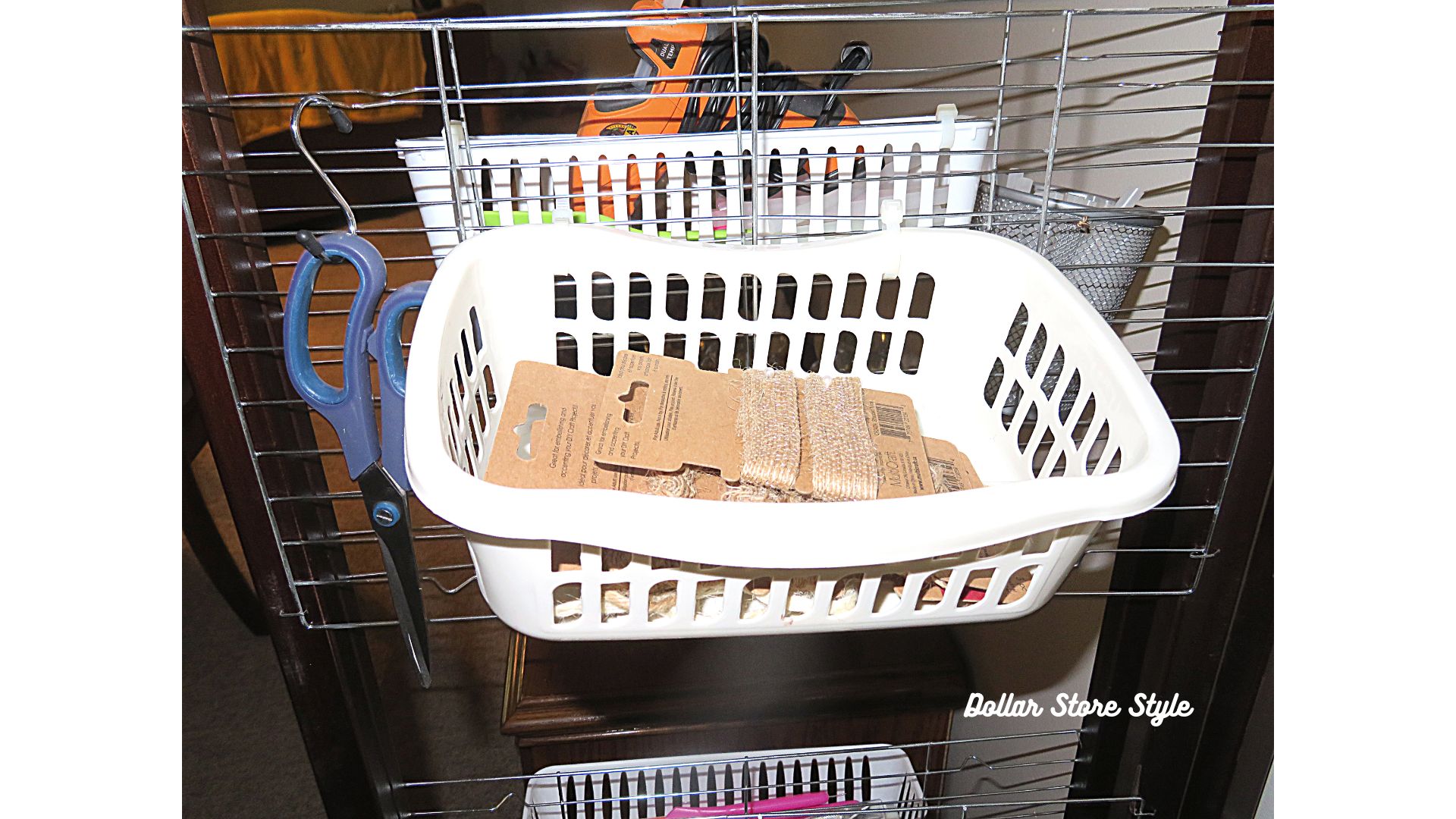 This larger basket also works well on my storage rack, again using two cable ties to hold it on.. 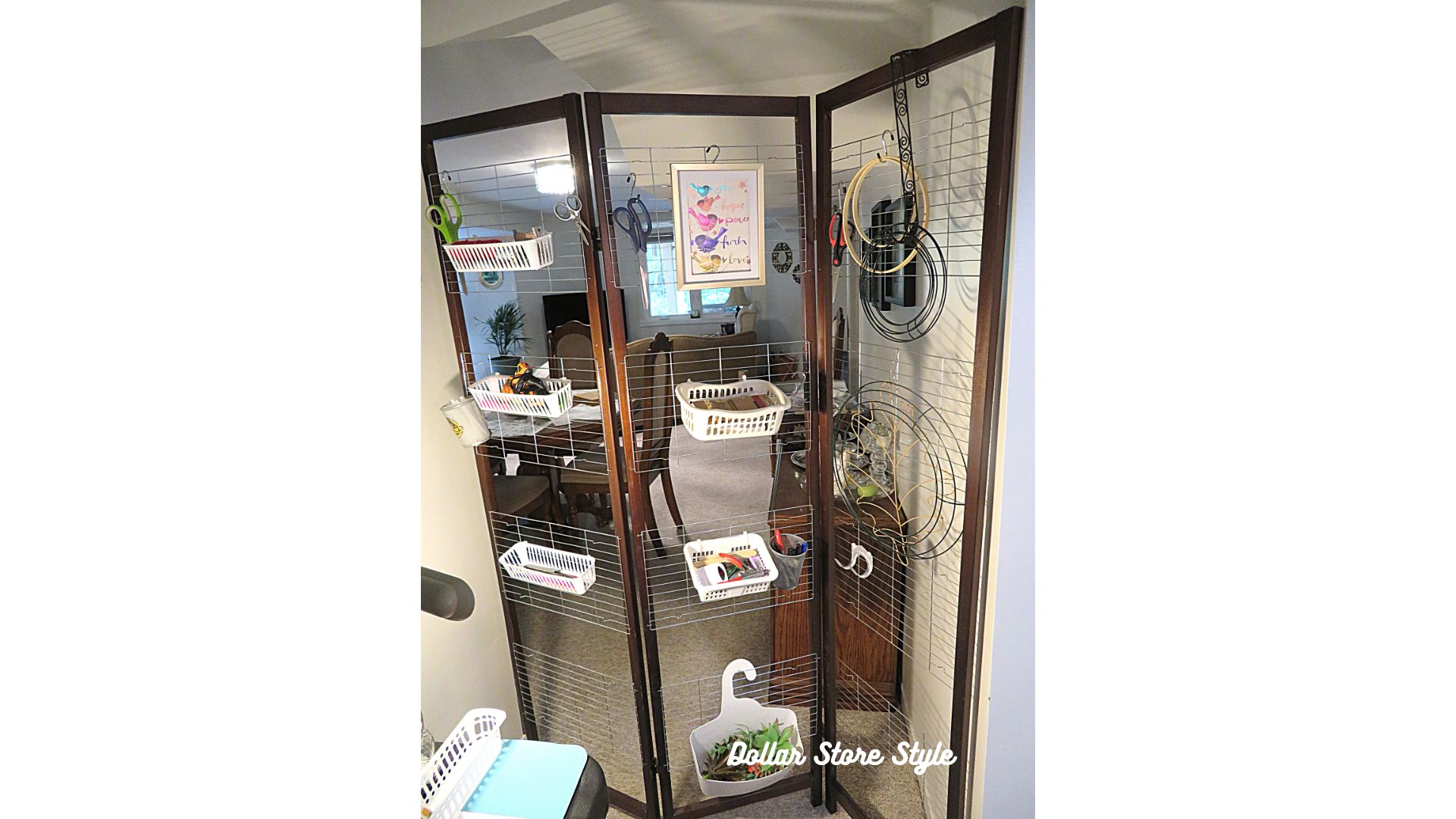 So far, this is what my storage unit looks like. However, there are endless configurations for using this storage unit. Here are a few ideas. 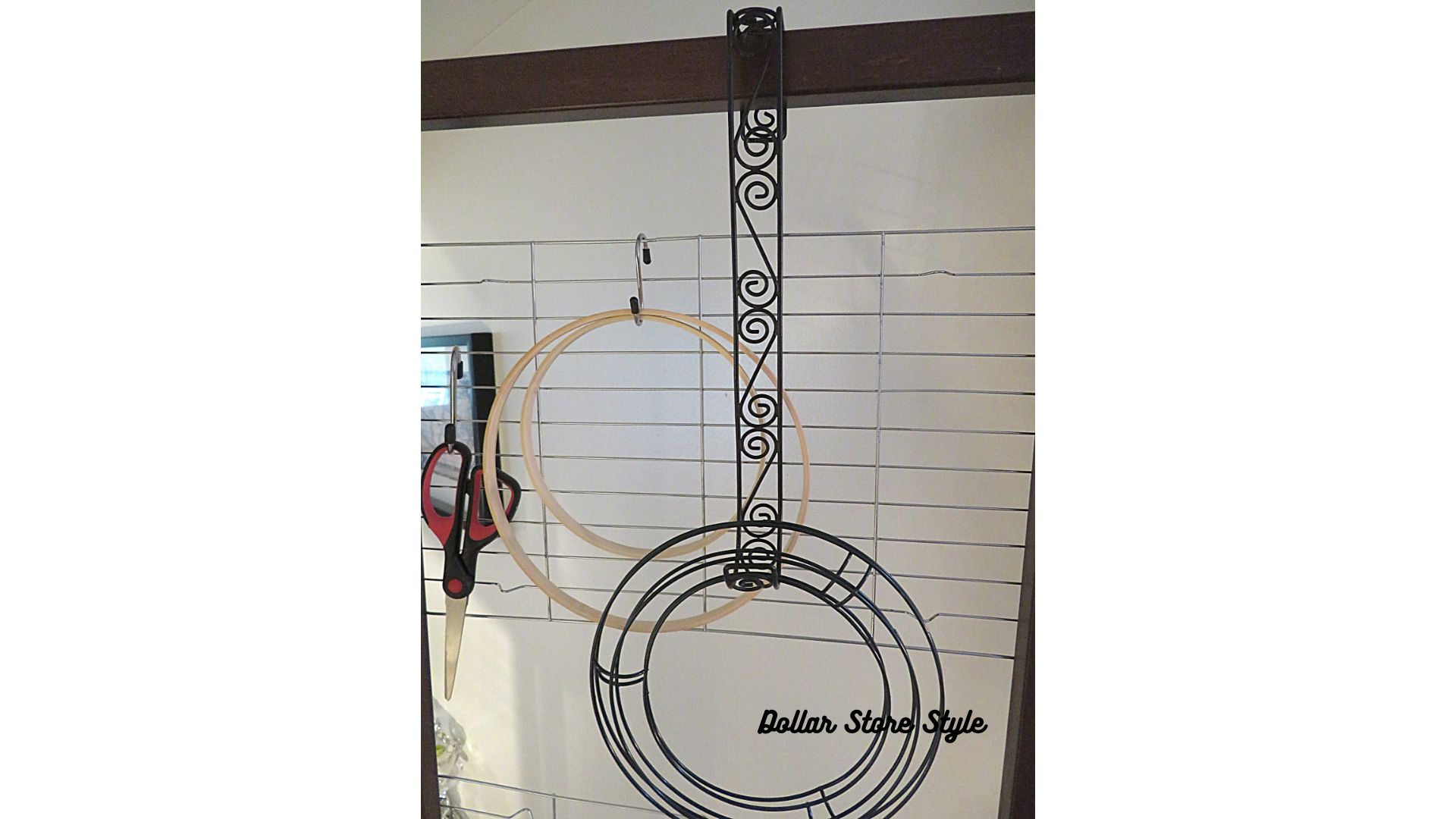 Besides s-hooks and cable ties, there are a few other ways to hang things. Why not store an extra wreath hanger here? It can serve the purpose of holding wreath forms, too. 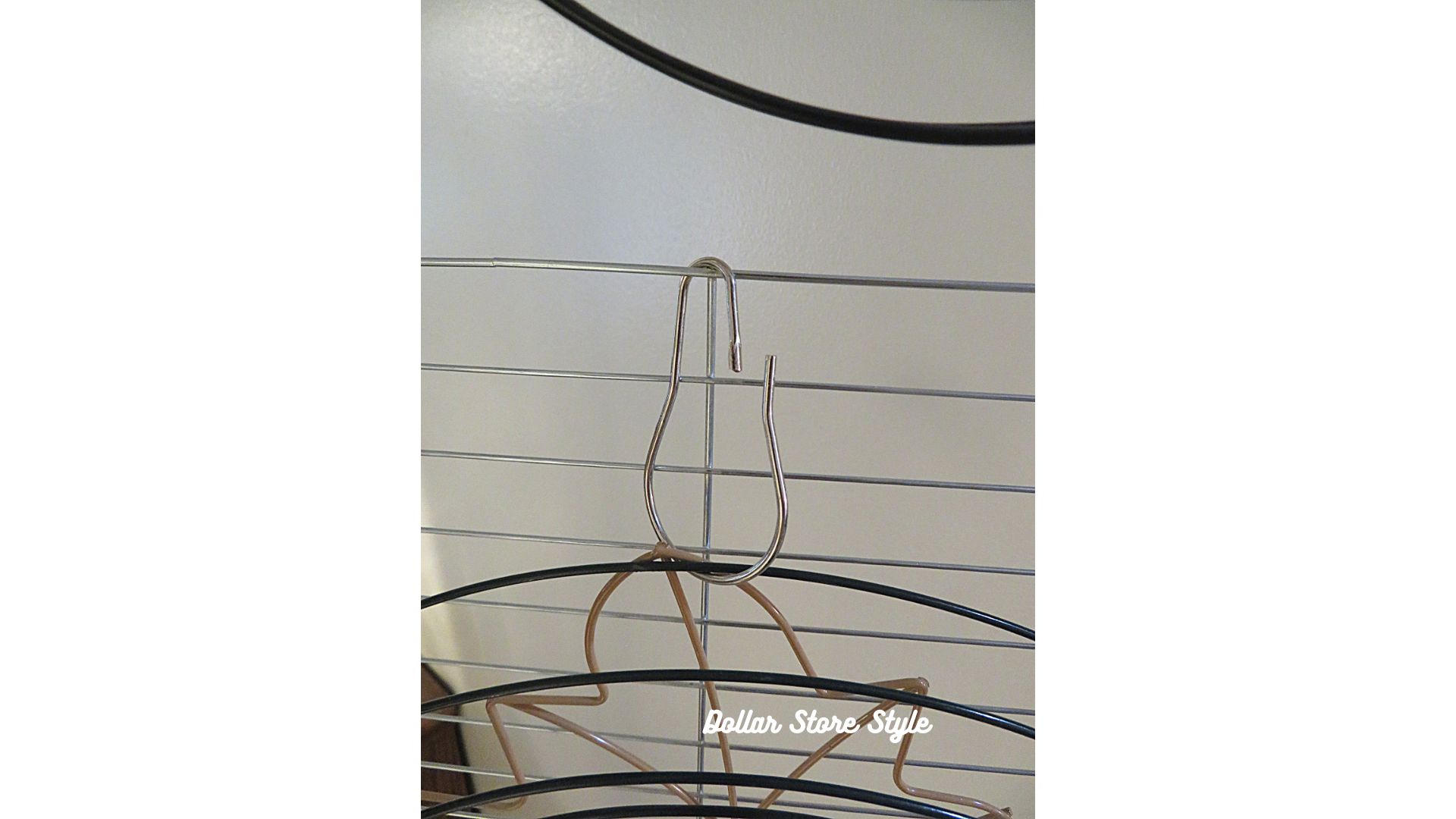 Wire shower curtain hooks can be put to use as hangers, as well. Again, this one is storing wreath forms. 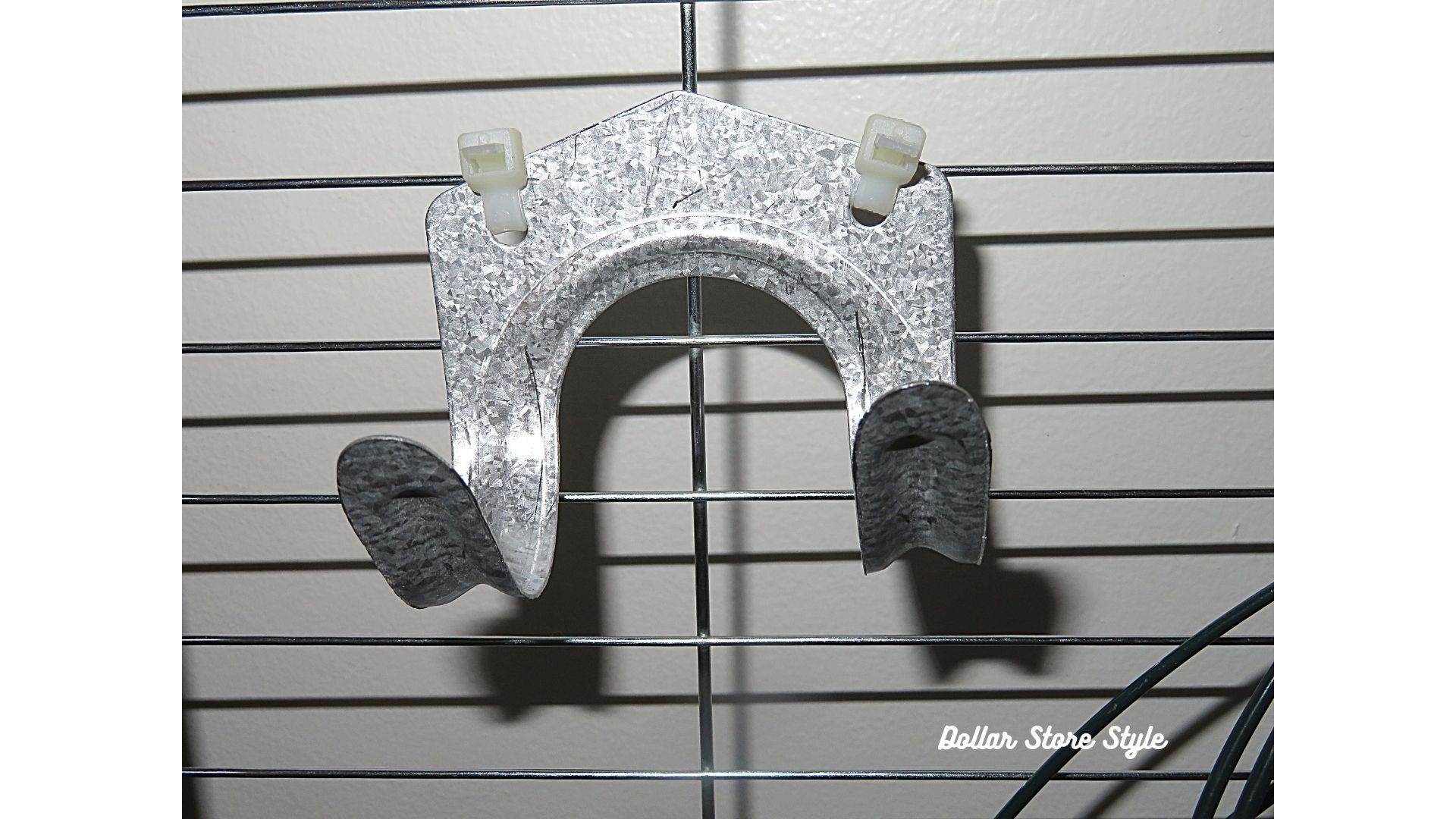 This type of hook comes in a pack of five usually stocked in the hardware section at Dollar Tree. Attach it to the rack using cable ties as before.

Add a Dry/Erase Board or Cork Board 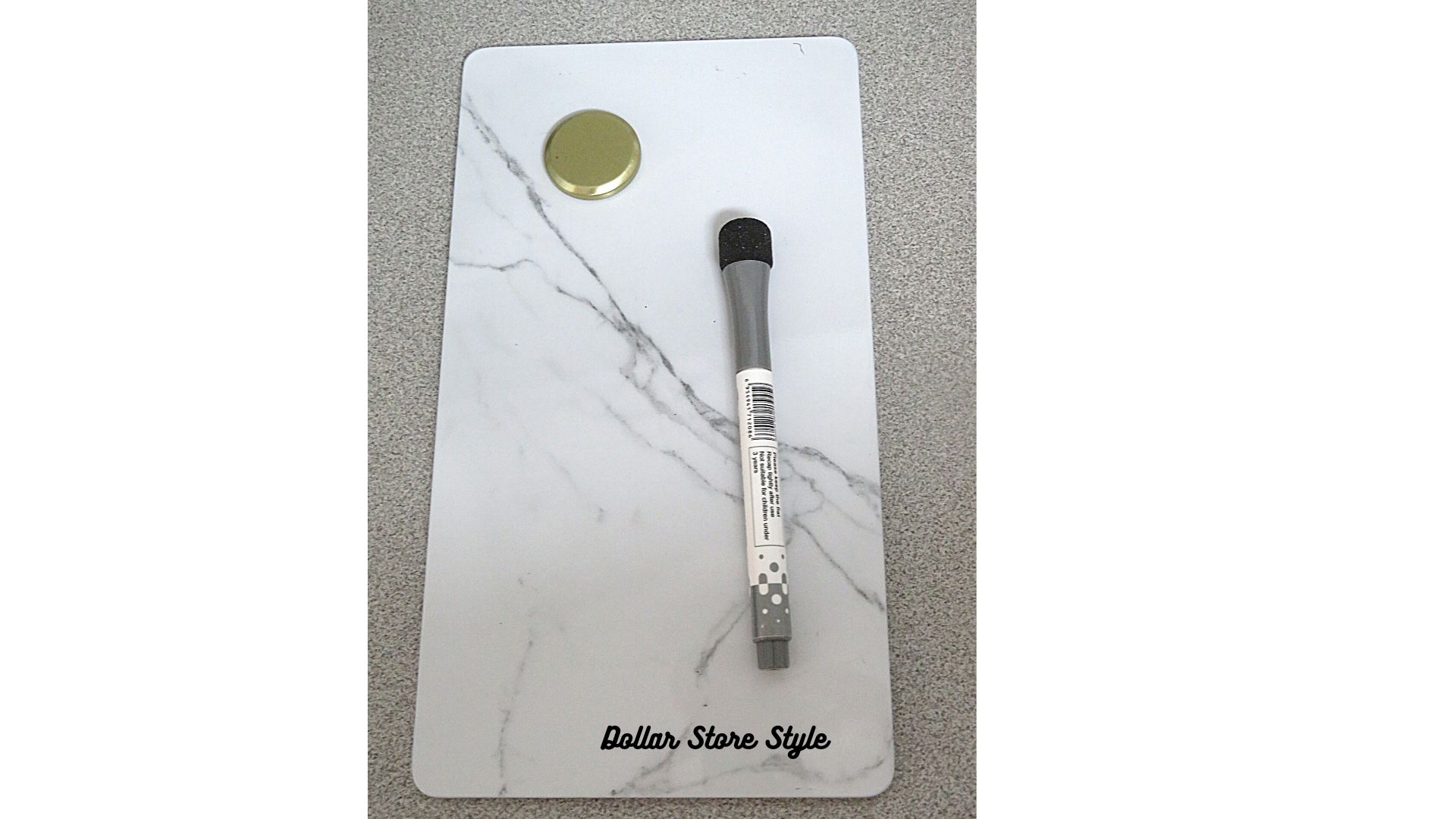 I found this small dry/erase board at Dollarama in the stationary aisle. It has magnet strips on the top and bottom but there isn’t enough metal in the surface of the racks to hold it in place. 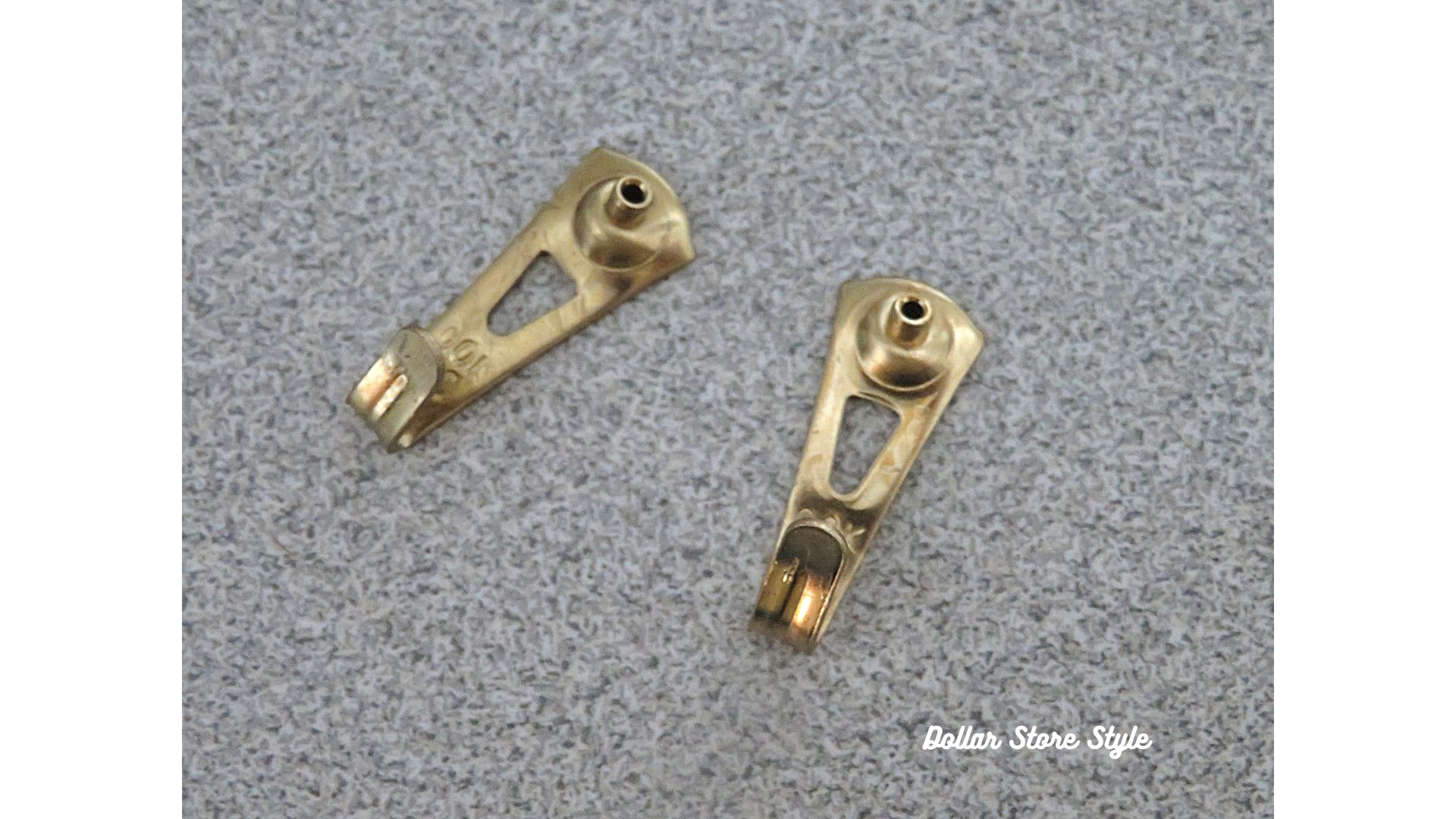 A solution presented itself when I found these hooks in my picture hanging kit, turned them upside down… 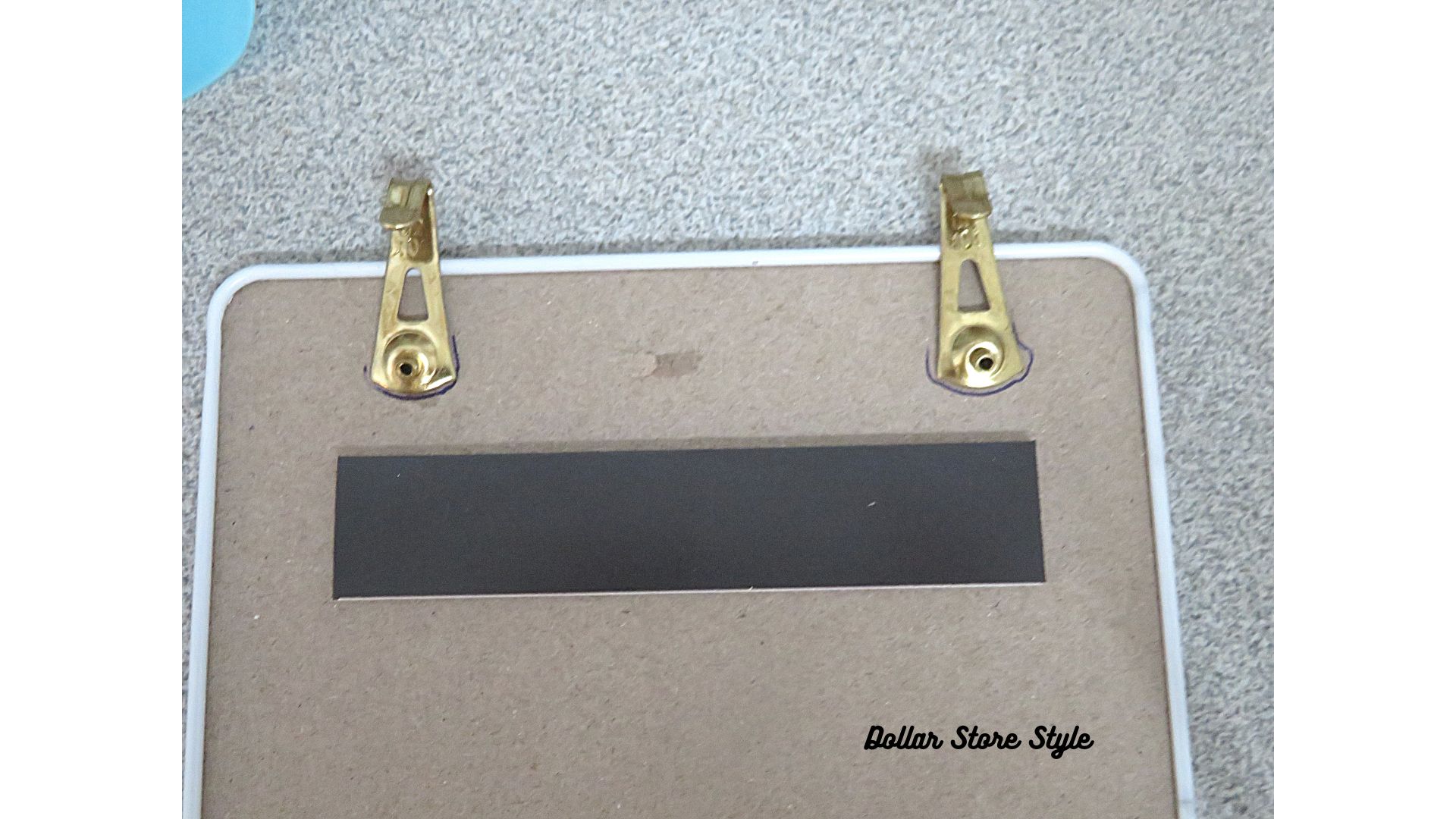 …and hot glued them to the top of my dry/erase board with the hook parts facing toward me. 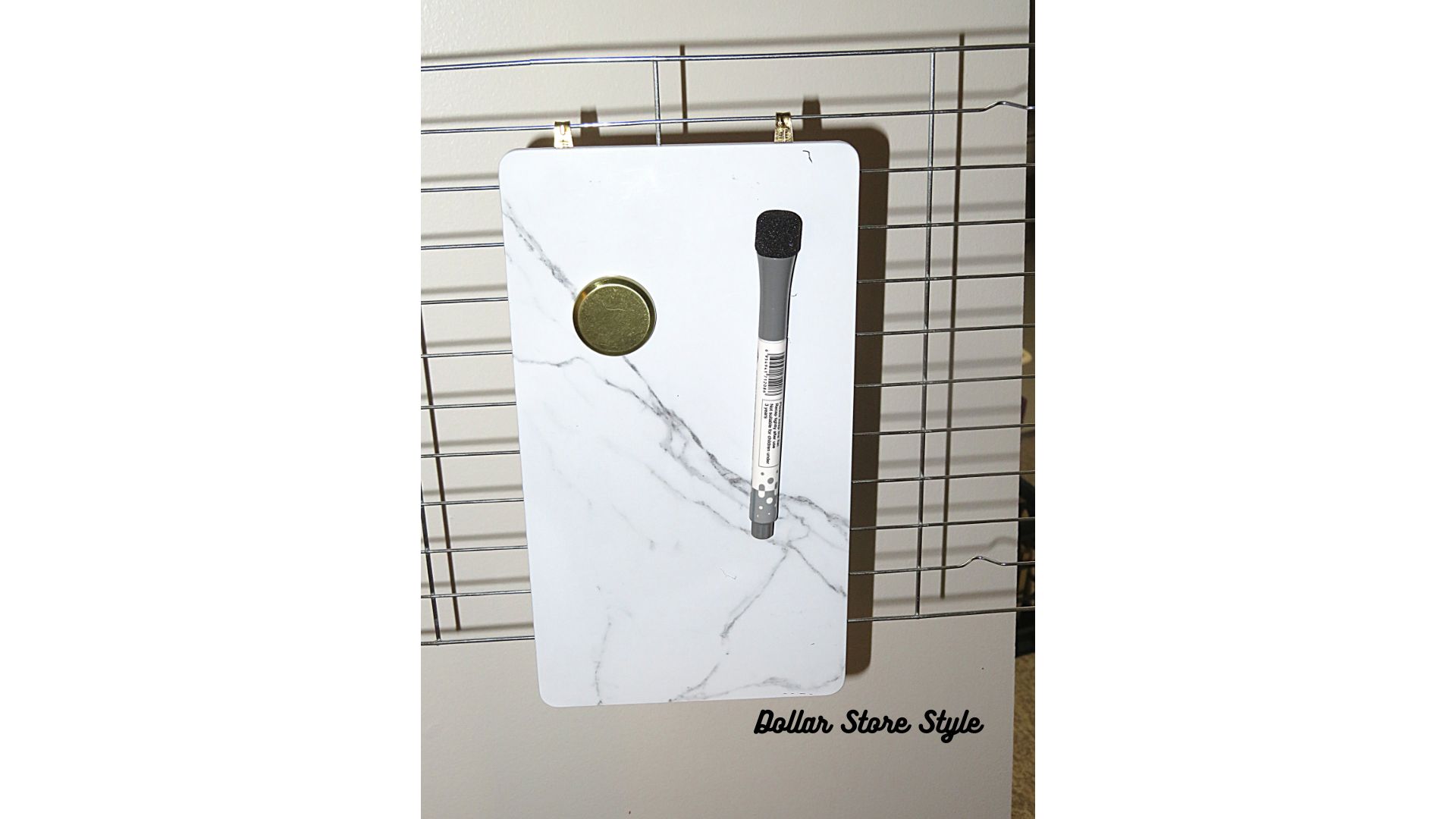 Then I just hooked the board over one of the cooling rack rungs.

I wanted something I could keep some taller crafting items in. Dollarama had a metal file holder that matched the pencil cups I had. I attached it sideways to the bottom rack on one of the sections, resting it on the bottom rung of the wood frame to help support the weight. 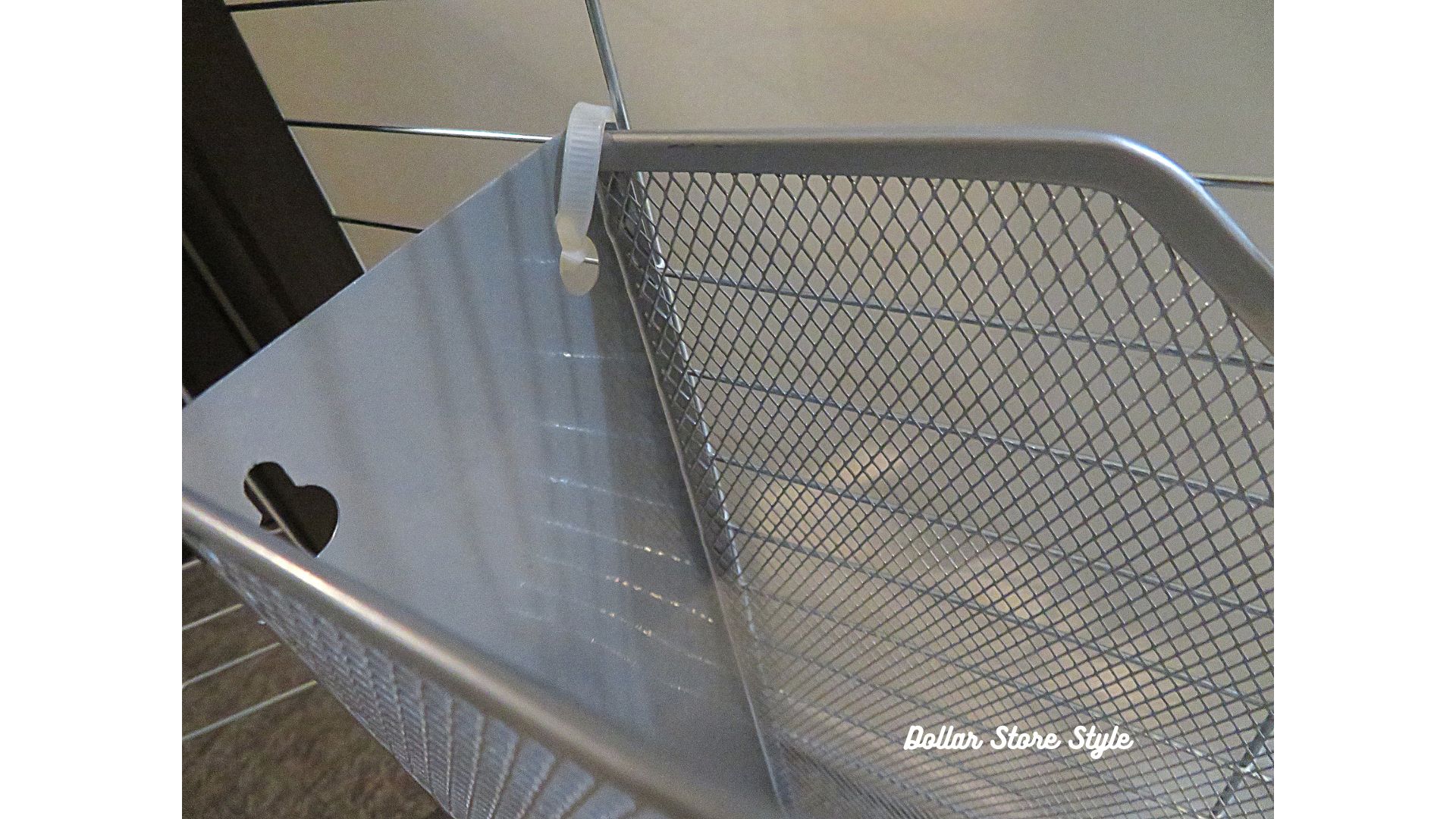 There were already two holes in the back of the holder where you could attach screws, so I threaded a cable tie through the one next to the rack and tied it on the same way I did with the plastic bins. I wanted to do the same near the bottom of the file holder and considered using the twine method again. However, an easier solution was to poke a larger hole through the section in question. 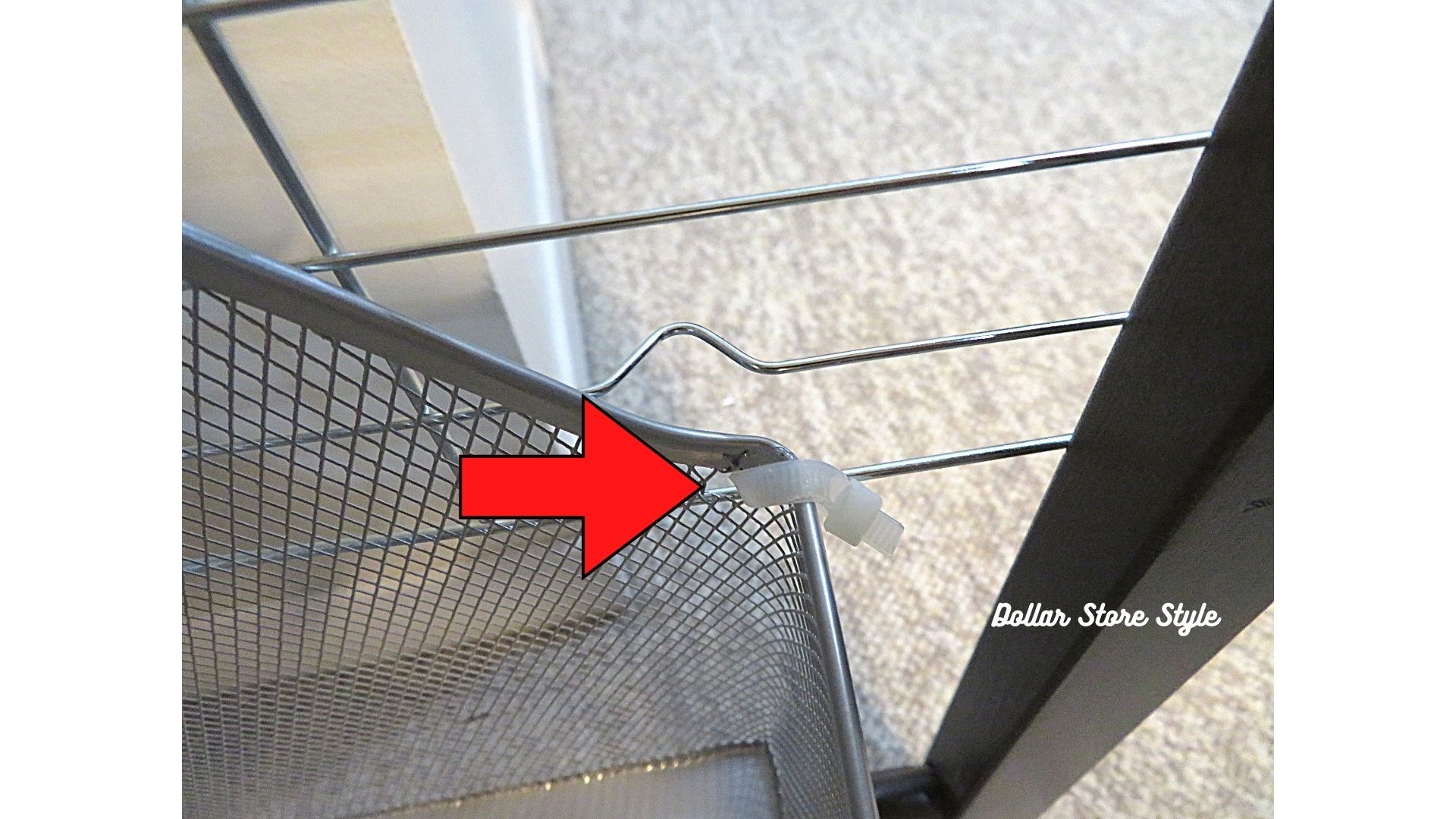 I used the tip of my mitre shears to do that and found this was easier than I thought it would be. Then I used the flat part of my scissors to flatten any sharp pieces against the inside of the file holder. Then it was a simple matter to thread the cable tie through it and around one of the cooling rack rungs and it was ready to hold miscellaneous items. 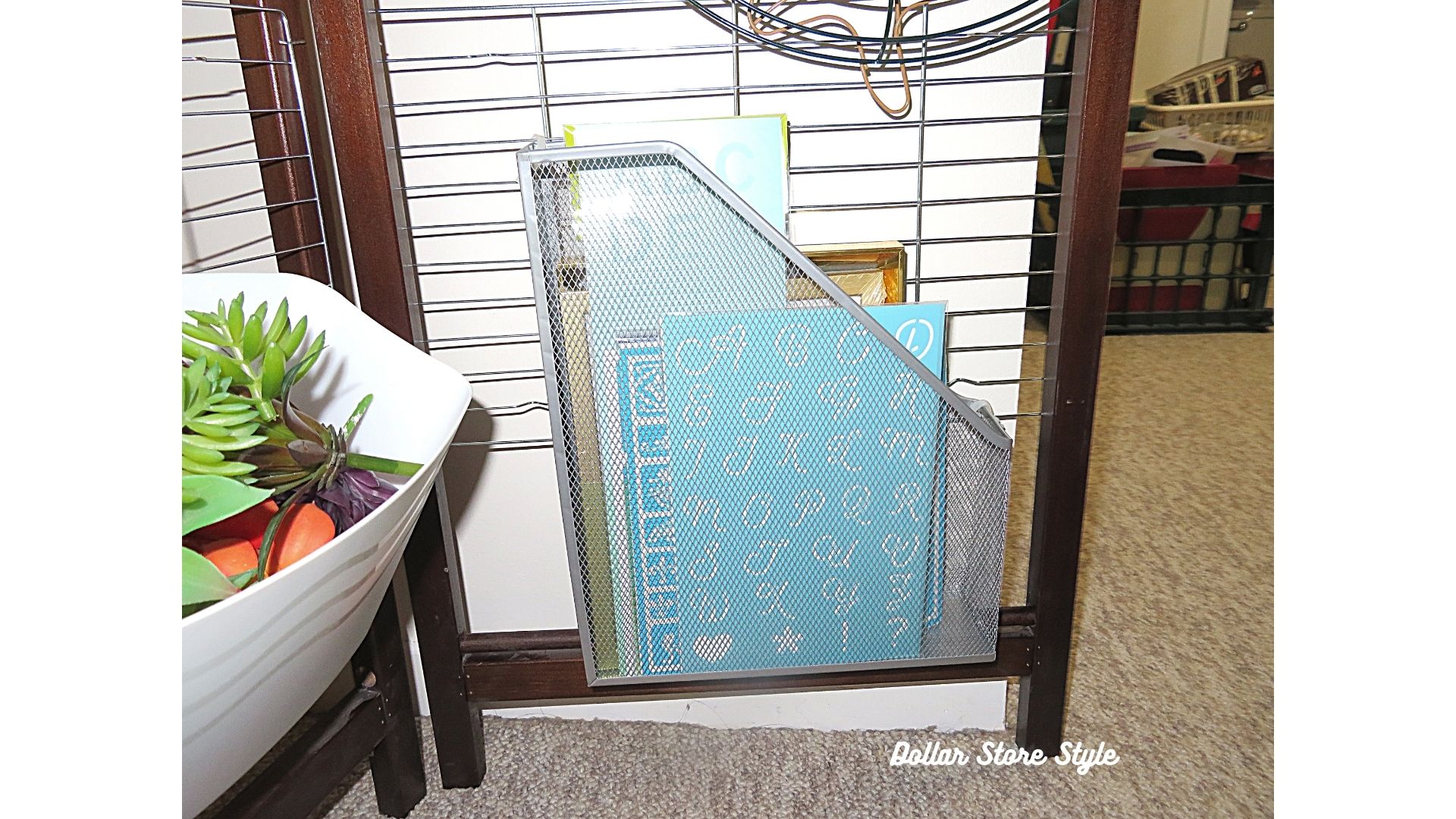 Because this is a free standing craft storage unit, I don’t plan on putting anything too heavy in it, but it makes a great place to store a few light frames or my stencils. 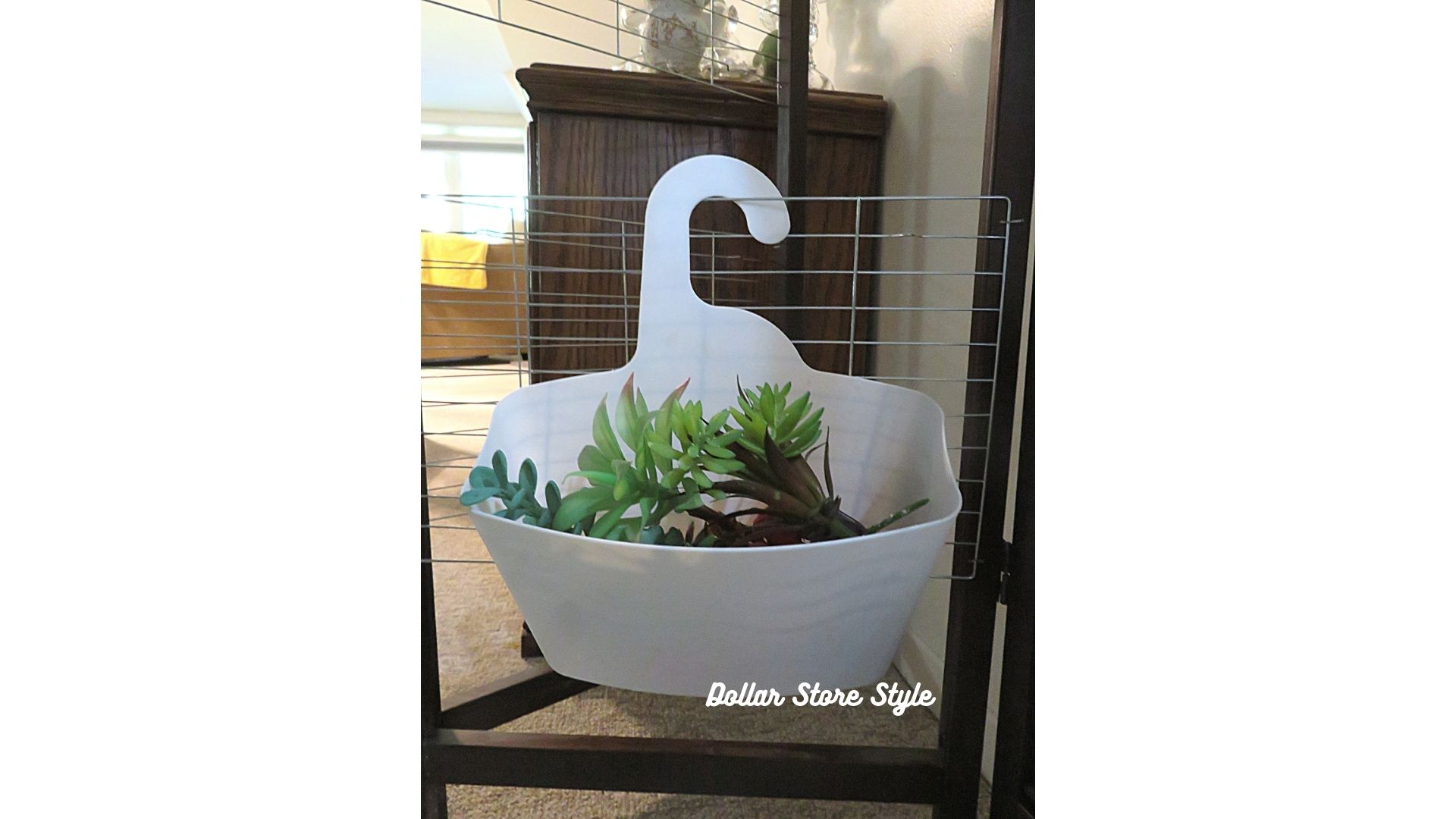 I bought a couple of these hanging bins at Dollarama a few years back. I’m using this one to hold my succulents. This type of bin doesn’t need any special attachments as it just hooks over the cooling rack.

This storage rack is completely customizable to whatever you need it for. It might also be used in a kitchen, or bathroom.  Paint your cookie cooking racks or leave them plain. I’ve even thought of covering a folding screen and cooling racks with greenery to use as a privacy screen outdoors.

Let me know what you would use this idea for. marlenealexander2327@gmail.com

Like this article? Sign up for my newsletter. Every month you’ll get a new article, my pick for Find of the Week, a Quick Tip and much more.